Slicks of the Week 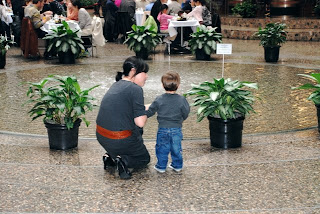 1. Charlie Brown Thanksgiving Special: I'll never tire of Snoopy making toast and popcorn for T-day dinner. And where are the parents? Who's driving the car at the end when all the Peanuts go to Grandma's house?

2. Seeing old friends: This is the time of year you get to see all your best and closest friends from years gone by.

3. Not shopping on Black Friday: Ok, well I did go on Amazon at like 7am and we did hop into the Gap and a toy store at like 10am, but we avoided the throngs of shoppers at the malls and shopping centers.

5. Maddox of the week: He is now officially a flirt. Flirting with all our friends and dancing his little butt off to Kayne West. Love it.
Posted by The Slick Mom at 12:57 PM No comments: 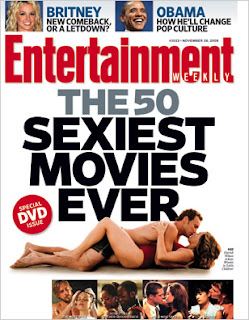 Yesterday, Maddox was engrossed in the latest Entertainment Weekly cover. The cover shouts "50 Sexiest Movies Ever" and has Kate Winslet and Patrick Wilson embraced in a lovers romp. Maddox was captivated. The couple is half naked and passionately kissing. He couldn't take his eyes off of it. I asked him what he thought, he laughed. Then I said, "They're kissing" and I proceeded to make kissing noises, which he promptly repeated and kissed the cover and laughed some more. Is this the start with my boys fascination with sex? At 22 months! I'm not ready for this! I know I'm over-reacting. I'm sure the convo about the Birds and the Bees won't happen for at least a few more years and then it will be his Dad doing the explaining, not me. But I have to admit, seeing Maddox so in to the two people making out was funny.

As far as the list of Sexiest Movies from Entertainment Weekly, I was a bit disappointed. I know this list was comprised by a man. Number 1...Out of Site?? Really??? The sexiest movie ever? I don't see it. And Bull Durham? In the top 10? Like I said, a man. Of course a man would think a baseball movie is sexy. Now they did include Swimming Pool and Y Tu Mama Tambien, so I do give EW some props. But you got to rethink your top spot.
Posted by The Slick Mom at 10:25 AM 1 comment: 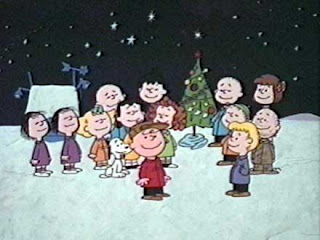 This is my favorite time of year. I know I'm not alone. I get such a warm and fuzzy feeling each time I see holiday decorations. It just so happens that I work downtown this year and the stores are decked out in all their Merry Christmas glory. Macy’s even has real live animals in their store displays. I love it (although I’m sure PETA may not). Alas, this year we won’t be spending the holidays with family. With relatives living in every corner of the world, we just couldn’t swing it. This is where the friends come in. Friends have become our adoptive families. When you live miles and miles from real family, friends are a big part of your life. Our Thanksgiving tradition will be spent with a good friend and her family. She puts on an elaborate dinner every year with about 20 people and about twice that count in dishes of food. The last time I was at her Thanksgiving dinner I was pregnant and couldn’t really partake in the wine or the amount of food I wanted since I couldn’t fit much in my big fat belly, but this year…bring it on. Christmas will be spent in the Mountains. A house rental, friends, skiing, snow, all you need really. So, I’ve got Charlie Brown set on my DVR, I have my Blu-Ray disc of The Christmas Story and decorations are out of storage. Let the month of revelry begin!
Posted by The Slick Mom at 3:24 PM No comments:

As I'm sure like most of America...weekends have a certain ritual to follow. The people and places involved usually changes up but the basic goals and outcomes are the same.

Although weekends can be the same over and over. I simply love it. I wouldn't change a thing.
Posted by The Slick Mom at 7:14 PM No comments:

Slicks of the Week

Happy Friday everyone. Now go get a glass of wine and relax.
Posted by The Slick Mom at 9:48 AM No comments:

What's with all these Vampires in my coffee? 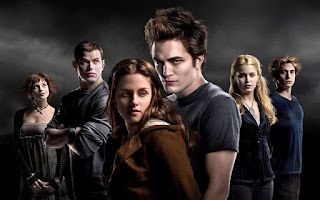 I'm a fan of HBO's True Blood. At first, I was on the fence. It seemed a little hokey pokey. The camp was a little overboard. But it "sucked" me in. And now I'm a faithful watcher. Sookie and Bill are OK, but I really love watching Jason and his stupidity.

The latest Vampire craze is something called "Twilight". Maybe you heard of it? Some series of books that all the kids love? Well as you probably know it has been made into a motion picture and throngs of girls are going nuts for the actors. Rather, going nuts for one of the actors, Robert Pattinson. The cast has been on the cover of Entertainment Weekly, in In Style, on the Today Show... they're everywhere. What gets me is the craze about this guy. The other week at my local mall, his appearance caused havoc. People stampeding, rushed to the hospital... All over a guy that plays a vampire. It's like the Beatles all over, but this time the Beatles bite!

Just like the Beatles, teenage girl crushes are nothing new. John, Ringo, Paul and George turned into John, Simon, Andy and Roger for my generation, and then there was NKOTB. Even Hannah Montana have girls in a tizzy.

What I really think it comes down to is people need an escape. A fantasy. Someone to hold up on a pedestal and dream about. A man to rush in, bite you on your neck and save you from all the misery in the world. So poetic.
Posted by The Slick Mom at 9:39 AM No comments:

Power to the People

With this week's attention on the Motrin ad campaign and the mother's who destroyed it, another point goes on the scoreboard for Social Media with the cancellation rumors of the NBC show, Lipstick Jungle. Reports came out last week that the Brooke Shield's drama was wiping off it's make-up. Well, of course this didn't sit well with the legion of fans of the show. So what to do? Send lipstick to the network in protest, Jericho style, that's what.

Brooke Shields told the New Yorker Observer that the peacock network was receiving loads of lipstick from fans that didn't want to see the show die. My first thought...there are some lucky women in the halls of NBC networks right now. Free lipstick! Officially, the New York Times reports that the show is sticking around because of better ratings after moving to Friday nights (usually the death toll for any series). But I have a feeling that those women with all the new colors of lipstick to try for fall may have had a change of heart.

What else can Social Media change? Let's work on the economy, maybe.
Posted by The Slick Mom at 9:31 AM No comments:

There's been a lot of hype about the new Motrin ad campaign targeted at mothers wearing babies and how it puts a strain on your back. I've seen the print ad and thought, chill out Moms! Not a big deal. I read the backlash and was actually going to write today to defend Motrin until I did some more research and watched the TV ad on youtube.

I have to say, I understand why all the moms out there are pissed at Motrin. The ad is pretty condescending to moms. The part at the end saying we look tired and crazy because of carrying our babies around? Wow.

Now...I do agree I take more Advil (not Motrin) after having Maddox then I did before. Carrying around a 25lb on a daily basis doesn't help the back. Plus, those slings never did really work for me. I spent $100s on shells, Bjorns, wraps and only really used the Bjorn. It's the only one that did not make me feel like I was lugging around a crate of apples. But the ad is still pretty offensive.

The ad spurred a twittering backlash against Motrin. Bloggers calling themselves "Motrinmoms" were enraged.

Mortin has since pulled the campaign and is apologizing to the moms out there. What do you think? Should the ads be pulled? Are you pissed? Will you ever take Motrin again?
Posted by The Slick Mom at 11:40 AM 3 comments:

What's in a name?

Coming up with a name for this blog wasn't that easy. All the good names have been taken, copyrighted and exploited. What really burns me are all the squatters. A name or URL has been registered by someone that hasn't touched it since 1999. I know if I had money I could swoop in, offer a deal and the URL would be mine...but, no money...no swooping. So I'll bide my time on The Slick Mom until something opens up. I like "The Slick Mom". It works. It may just be the name I go with for all time. We'll see.
Posted by The Slick Mom at 10:30 AM No comments:

This weekend I realized that my baby is becoming a real human being. Not to say that I never thought he was human, but when they are little and not talking, walking or anything else besides cry and poop, it’s really a different experience when they do more. Maddox is officially a walking, talking little dude. Now, he’s been walking for a while now and he has been doing a lot of little human-esque things over the past year but I guess this weekend it finally dawned on me. Words are starting to flow and he’s getting it. Really getting it. This weekend jumping, with both feet off the floor, has been added to his abilities. He also is using his wits and his common sense. He knows where his shoes go, his dirty socks, his toys. This morning before heading out for the day, he was being a little Ringo Starr and banging on a plastic Tupperware dish with a wooden spoon, I said “ let’s go” and he promptly went to the cupboard where the plastic dish lives and began putting it away. This floored me. Now it may seem simple to you, but other mothers of toddlers will agree, when the kid actually listens, gets it and does it, it’s a whole new world. Now, once we conquer the not throwing food thing we’ll be golden. And then I'm sure it will all fall apart again and we'll start from square one.
Posted by The Slick Mom at 3:25 PM 2 comments: