Dads are the new Moms 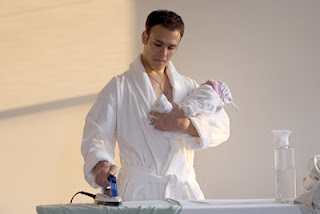 Are the new generation of dads getting the short end of the stick? Back in the day, the typical family roles were, as we all know, dad goes to work and brings home the bacon, mom stays home and takes care of the kids and the housework and kids, well they're just the kids. As generations pass, dad's have been taking a bigger role in the parenting aspect of the family. Sure, dads have been helping out for some time, but now more then ever the split is more 50/50. In some households the bulk of the childcare lands in the father's lap. There are more stay at home dads then ever. A study done last year from the US Census says there are 159,000 stay-at-home dads, or 2.7 percent of the country's stay-at-home parents are the dads -- almost triple the percentage from a decade ago. Talk about a sea change.

In my house the roles are pretty 50/50. When we first had Maddox and I went back to work full time, we shared in every responsibility. We shared duties on almost every aspect of raising Maddox. Now that I work less, I do tend to do a little more of the share. I say it's leaning about 60/40 at the moment. But every so often I wonder if dads want the 1950s style of life. Come home from work promptly at 5:15pm, dinner on the table, kids clean, quiet and well behaved. After dinner head to the TV or newspaper (or Internet) while mom cleans the kitchen, cleans the kids, puts the kids to bed. Then comes to the bed and still has the energy to make more babies. Almost seems like and ideal situation. Now men are supposed to chip in, do their share, work and take care of the kids.

I know I wouldn't be able to do it by myself. Raising a child takes a village as the old saying goes. Which I guess says a lot. Back in the 1950s most people lived in the towns they grew up in and had plenty of extended family at their beck and call. Now with so many people living far from family, it takes both parents to share the load. I don't have a Grandma waiting patiently by the phone for my call to come watch Maddox. If we want to go out or see a movie we need to pay a sitter. I still do wonder though if every so often dads want to live in the 50s. This equality stuff can stink sometimes.
Posted by The Slick Mom at 9:24 AM

I want the 50's back, but without the racism, threat of nuclear war and I want my iPhone to work.