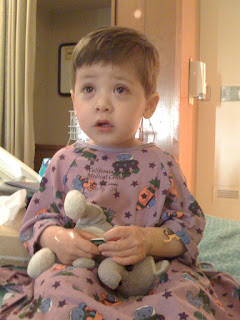 Last Wednesday as I picked Maddox up from daycare I noticed he was running a fever. At that point we can't take him back to daycare for 24 hours. Of course, this threw schedules into disarray. I was scheduled on two live events at work on Thursday and Sacha had meetings back to back all day. I scrambled to get my work covered and planned to stay home on Thursday. The fever got increasingly worse through out Wednesday evening and in the morning it had hit 102 and Maddox was miserable. After giving him Tylenol and calling the doctor's we just thought it was a bad cold and kept trying to bring the fever down with baths, cold wash clothes and more Tylenol. After his nap his eyes were completely crusted over and he was screaming. We had already had an appointment for the doctors on Friday since a couple weeks early he was treated for and ear infection. I called the advice nurse again and she thought it was OK to wait for that appointment and just keep an eye on him.

By Friday morning he seemed better, but when 11am hit the fever came back with a vengeance. He was back to being miserable. We took him to the doctors on Friday afternoon and everything went down hill from there. After a chest x-ray the doc determined it was Pneumonia. Poor little guy. Off to the hospital we go. The next 24 hours was filled with IVs, oxygen, breathing treatments, vitals checks and plenty of doctors and nurses poking and prodding. He was just a wreck. It's so weird to see your baby go through something like this. They have no idea what's happening.

I do have to say that Maddox was awesome. Even when his fever hit 104 at one point, he made it through. We thought (hoped) we'd be sent home on Monday, but they kept us until Tuesday. One part of me was exasperated that we needed to spend yet another night in the hospital, but then knowing that as long as they want to check on Maddox the better he will be. Especially since we leave for Sydney in 4 days, which by the way was another scramble since we had to cancel our original flight and postpone a few days.

To add to the mix, we flew my mother out from Detroit to spend the week with us and help us care for Maddox as we went back to work and school. I'm exhausted. It's amazing what 4 days in a hospital with a sick child can do to your state of mind.

The good news is he is almost 100% back to being our happy, giggly, little boy.
Posted by The Slick Mom at 1:16 PM