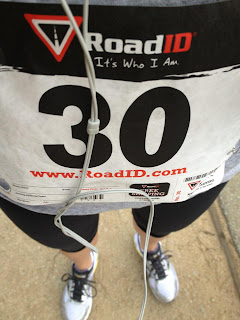 I finally did it.  After 3 months of the Couch to 5K program and running 2-3 times at dawn every week.  My intention was to run the San Francisco Bridge to Bridge last Sunday.  When I started the training program I registered.  It's a 7K race but there's a huge hill right in the middle, so I planned to walk that.  Well as luck would have it my son landed in the hostpital the Thursday before the race.  He had a major asthma attack.  He was there until Sunday morning. We tried to arrange care and schedules so I could still complete the race, but it wasnt' meant to be.  I wanted to be with my son and the logistics were too intense to figure out.

I hurried up and signed up for another race this weekend.  It was called the Quadtoberfest.  ANd again it almost didn't happen.  After sleeping in the hospital for a couple nights, my back was out of whack.  It was sore the beginning of the week and then on Wednesday I woke and almost couldn't move.  Up until last night I was iffy if I should still run today.  But, I had to. If I pushed it again I'd have anbother conflict and another.  If I was going to do this, really be a runner, I had to do it.

I woke at 6:00am for the 7:30am race.  Got dressed, ate a bagel, drank a little sports drink, water and popped some Advil.

I got to the course at 7:00am.  No one was there.  About 7:10 another runner showed.  Still no site of the organizers.  And no bathroom!  Finally around 7:15 the organizers showed.  This was definaitely a more casual race.  About 3 others showed for the 5K.  A handful for the half and marathon.  In my group was another first timer, a younger girl, two children and their dad.  It actually felt nice to have a small group and no pressure.

It felt great to finish.  And wasn't as horrible as I thought it would be. I felt amazing after and am excited to sign-up for my next one!  I did it!
Posted by The Slick Mom at 3:07 PM